What Are We Studying?

The aim of the project is to characterize the effects of development on the populations of herpetofauna living in the Stone Canyon neighborhood. The project focuses particularly on 4 species, Crotalus atrox (Diamondback rattlesnake), Crotalus tigris (Tiger Rattlesnake), Crotalus molossus (Black-Tailed Rattlesnake) and Heloderma suspectum (Gila Monster). To do this, researchers have been gathering data on herpetofauna (reptiles and amphibians) at the Stone Canyon development site since as far back as 2002, with some gaps.  The site is an upperclass residential development with lush golf courses and houses spread far apart. Because the project has been ongoing for a long time, data generated can be compared to past observations in order to determine trends caused by the site's development. The project is currently being taken on by students under the direction of Dr. Matthew Goode from the School of Natural Resources and the Environment.

Urban development has various effects on biotic communities, often leading to a decrease in native species, and a loss of biodiversity. This research focuses on the effects of urban development on herpetofauna at Stone Canyon, a residential community and golf course located at the base of the Tortolita Mountains near Oro Valley, Arizona. We conduct nightly road and golf cart path surveys to document snakes and Gila Monsters (Heloderma suspectum) throughout the development during our summer field season.  We obtain environmental (e.g., temperature, relative humidity) and location data (in UTM coordinates) for each capture, measure biometrics of all species such as snout-to-vent length and mass and implant microchips for individual identification, determining age class and sex, and obtaining fecal and tissue samples. We quantify time spent and distance covered during surveys, which allows for calculation of animals captured per unit effort. To examine potential relationships between relative abundance of animals and ambient environmental variables, we set up data loggers and rain gauges at sites on and away from the golf course to record data on temperature, humidity, and precipitation and record temperature, humidity and cloud cover at the beginning and end of each survey. We compared data collected since 2017 with our long-term (2002-2014) data set from the same site to make inferences about effects of ongoing urbanization on relative abundance, diversity and distribution of snakes and Gila Monsters. We discuss our results as they relate to anthropogenic change and increased human presence, with an emphasis on information that should lead to more effective conservation and management strategies for herpetofauna living on the urban fringe.

Since 2017, our research team has conducted nightly road and golf cart path surveys to document snakes and Gila Monsters (Heloderma suspectum) throughout the development site during our summer field season. We obtain environmental (temperature, relative humidity, light conditions) and location data (in UTM coordinates) for each capture. Animals were released the next day during the following survey.

For each survey, effort is recorded as both time spent and distance traveled. This allows calculation of snakes per unit effort, and relative abundance of snakes when compared to past data.

Within a day of capture, snakes and Gila monsters are processed, individually marked, and released. We measure snout-to-vent length, tail length, mass, head width and length, age, sex, and body condition. Rattlesnake rattle length, segment number, and width of segments is measured and rattles are painted for easy field identification. Gila monster's tail circumference at the tenth whorl and tail volume are measured. Fecal samples are obtained for all species and blood samples are taken from Tiger Rattlesnakes. We use Passive Integrated Transponders (PIT) tags to identify individuals Gila monsters and snakes large enough to allow for PIT tagging. Snakes are anesthetized using gaseous isoflurane before any processing, and Gila Monsters are restrained to allow for safe measurements. After processing, snakes are manually intubated and ventilated to remove excess isoflurane and resuscitate the snake. Individuals are released at their original capture locations either during the next night's survey or after processing.

Environmental data for the site is collected at two monitoring stations, before and after each survey, at 2 rain gauges, and at point of capture. This environmental data can then be compared to snake capture rates. Temperature and humidity are recorded at regular (15 or 30 minute) intervals at two locations, one directly adjacent to the golf course, and one located off the course and away from houses and roads. These sites are also equipped with rain gauges, that are checked nightly during the summer field season. Before and after surveys, ambient temperature and humidity are recorded using a Kestrel, and cloud cover is estimated manually. At point of capture for all species, ambient and ground level temperature and humidity are recorded, as well as light conditions and substrate type. 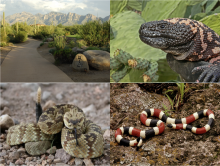 Species Accounts (2018) for all snake species and Gila monsters encountered at Stone Canyon.